In an effort to prompt informed campus and community conversations surrounding the William Green House, undergraduate student Sapphire Srigley curated an interactive research website. Click on the link above to be redirected to the website, which hosts information on the history of the house, outcomes from archaeological excavations, a 3D artifact gallery, and a 30 minute documentary on the house.

Blink and you’d miss the hidden William Green Farmhouse which is located right on campus.  The house was built in 1720 and has a fascinating history. Most of the original farm structures have been demolished over time to accommodate the expanding college.

Led by General George Washington, the Continental Army was extremely active in the battlegrounds of New Jersey.  The Green farm, located less than three miles north from downtown Trenton, was bordered by Pennington Road, which was one of three major routes for the American militia attacking the Hessian soldiers in Trenton.  On Christmas night of 1776, Washington and his troops made their famed “crossing of the Delaware” just a few miles north of Ewing. After an arduous passage, the army began an early morning march toward Trenton in two divisions, separating one only about a quarter mile from the Green farmstead.  Skirmishes followed the main battle as the Hessian soldiers fled to Princeton over three main roads again bringing them alongside of the Green Farm. Additional battles and skirmishes took place in the vicinity of the house over the remainder of the campaign.

Along with other men in the area, Green III may have served in the militia and acted as a guide (Stryker 1967), even helping during the crossing of the Delaware (Barber and Howe 1857; Hoffman, 1942).  With William Green III’s probable involvement in the campaign against the British, as well as the Green Farmhouse’s proximate location to the skirmishes, it is likely that troops billeted at the farmstead. Casimir Pulaski’s Light Infantry was billeted in the Trenton area over the winter of 1777-1778 and their forage placed a great stress on the already struggling farms.   To alleviate this stress, cavalry was moved as often as possible, only remaining at farms for a couple of weeks at a time. William Green Farm likely provided one of these locations. In the pension application, Laning states that he “frequently” heard his father and William Green III discussing, “that a number of the Light Horse of Washington, [were] being billeted at different times during the war at William Green’s plantation” (Figure 4; Pension file R. 4271, 1836).  Because of the military service of Green III and his home’s close proximity to the major routes between Trenton and Princeton, archaeological evidence may still exist on the farmstead, which could provide further insight into the activity of the Continental Army (or even the British Army) at the house. 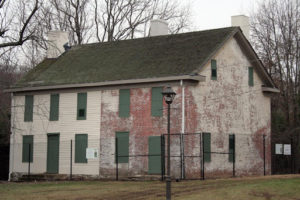 The north face of the house today. 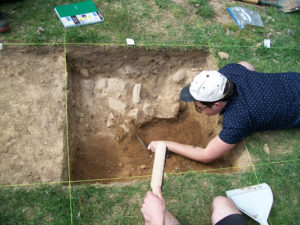 Students excavating a feature in the south yard. 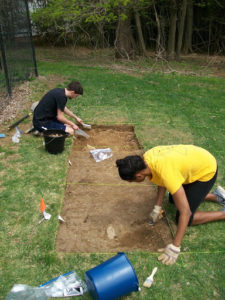 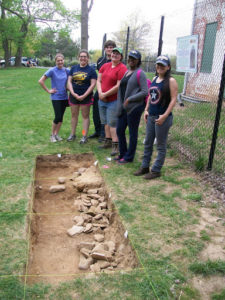 Students standing at one of the excavations. 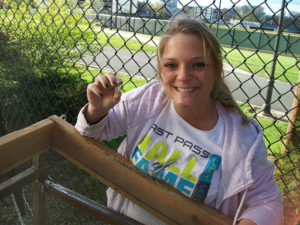 Finding an artifact at the sieve.